Sunnybrook’s “2011 Energy and Greenhouse Gas Report” shows that our CO2 emissions from energy used is 26,622 tonnes of CO2 – Why measure emissions and how do we put these numbers into context?
Let’s zoom out and start by looking at the whole planet. In May of this year the concentration of CO2 (the most common greenhouse gas) in our atmosphere reached 400ppm. Prior to the post industrial era, concentration levels were steadily below 280ppm and according to Scientific American the last time concentration levels were as high as 400ppm was thought to be over 2.5 million years ago before humans evolved. The graph below shows the global CO2 concentrations for the last 800 thousand years. 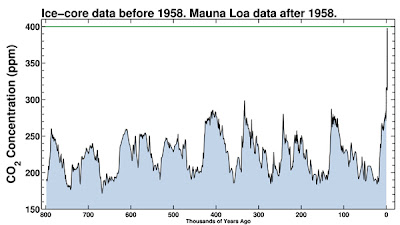 Source: Scientific American
This sobering milestone reminds us that the race is on for the world to curb and reduce our greenhouse gas (GHG) emissions before the atmospheric concentrations get “too high”, an unknown threshold which is still highly debated. Some predictions even suggest we’re already too high as atmospheric concentrations can take hundreds of years to be decreased due to the long life spans of GHGs in the atmosphere.

You can read more about CO2 concentrations in atmosphere:
http://blogs.scientificamerican.com/observations/2013/05/09/400-ppm-carbon-dioxide-in-the-atmosphere-reaches-prehistoric-levels/

So you may be wondering how much does Canada contribute to our global greenhouse gas emissions? Well below is a graph from a report on the trends in global CO2 emissions which shows Canada is one of the top emitters, at 556 million tonnes of CO2 in 2011. 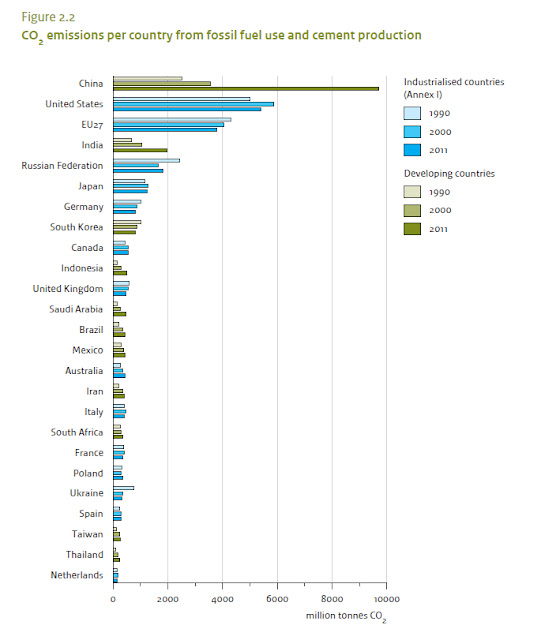 From this report it is clear that Canada has a significant impact on the world’s greenhouse gas levels and that we will need to play a major role in reducing global emissions. In fact, when you look at CO2 emissions per capita Canada ranks 4th highest showing that there are many countries with larger populations than ours who are emitting less.

You can read more about “Global Trends in CO2 Emissions” here:
http://edgar.jrc.ec.europa.eu/CO2REPORT2012.pdf

Now let’s consider why Canada is emitting this much CO2? The following graphs from “Canada’s 2011 Greenhouse Gas Inventory” report illustrate that 81% of Canada’s GHG emissions are resulting from the energy sector. And that Ontario and Alberta contributed 59% of the total GHG emissions in 2011. While Ontario, with it’s large manufacturing base started off as the largest-emitting province in 1990, it has been surpassed by Alberta in recent years. So we know that energy use in Ontario has a major impact on Canada’s total emissions. The following graph from a ministry of energy report titled “Reviewing Ontario’s Long Term Energy Plan” shows the breakdown of the province’s GHG emissions by sector. The transportation and industry sectors contribute more than half of the emissions but the commercial and institutional buildings sector (C&I) still accounts for 6.9% of the province’s GHG emissions approximately 11 million tonnes.

The Green Energy Act was introduced into Ontario legislature in 2009 to encourage energy conservation, renewable energy production, an to promote a green economy. In accordance with Ontario Regulation 397/11 of the Green Energy Act, all public agencies including hospitals are required to report their annual energy consumption and corresponding greenhouse gas emissions to the Ministry of Energy.

So let’s consider how this compares within the commercial and institutional sector. Since energy use is the main source of CO2 emissions for the C&I sector we can compare performance based on energy used by different building types.  The following charts from the “Commercial and Institutional Consumption of Energy Survey” illustrate the national averages for energy consumption and energy intensity of building types within the C&I sector. 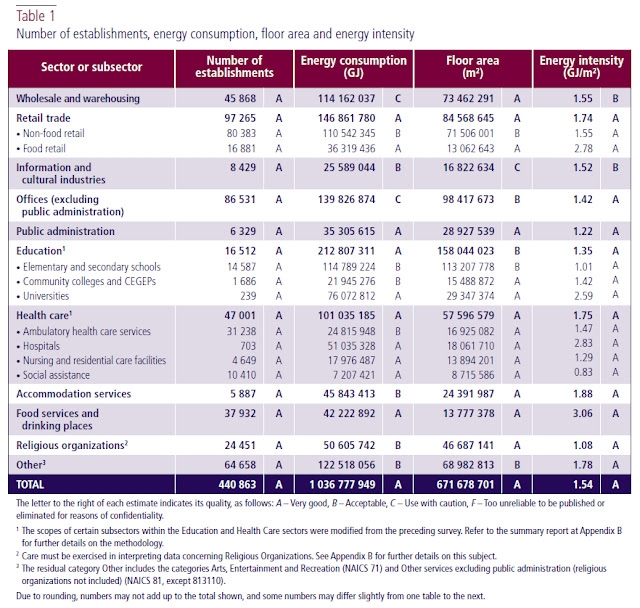 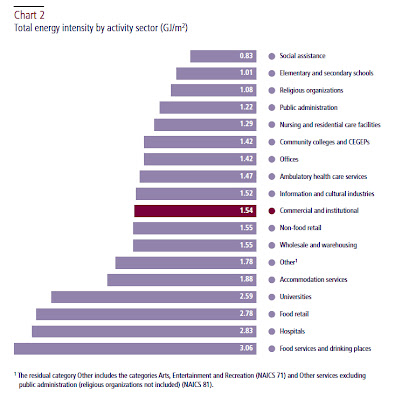 According to the energy survey, Healthcare buildings make up 10% of the energy used by the C&I sector with hospitals being one of the most energy intensive building types using on average 2.83 GJ of energy per square meter. The Sunnybrook emissions report shows that our campuses had energy intensities below the national average as follows:

Reducing global greenhouse gas emissions is a huge global challenge and it’s sometimes hard to see how our behaviours can make a difference. I hope all these graphs and numbers have helped to paint a bigger picture: