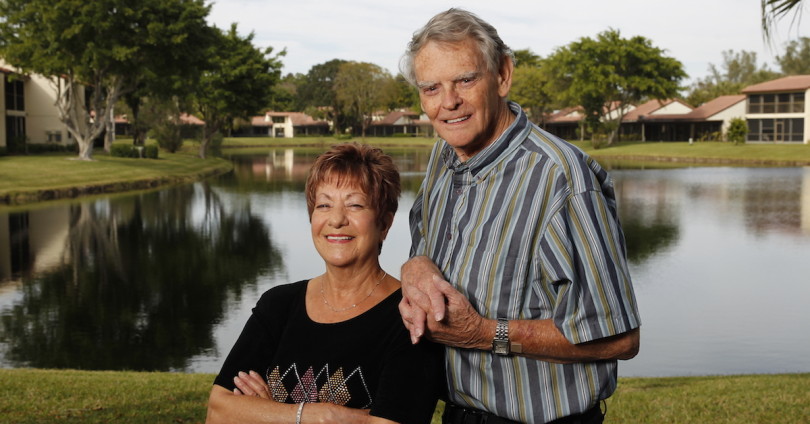 “I have ultimate faith in these guys. They never make promises they couldn’t keep,” says Rodney Witz of his Sunnybrook medical team. He is pictured with his wife Carol. (Photograph by Andrew Innerarity)

Rodney Witz had been cancer free for seven years since his treatment at Sunnybrook for prostate cancer. But a semi-annual follow-up blood test last year showed his PSA (prostate specific antigen) level was rising. Then came the troubling news: An imaging scan revealed that cancer cells had spread to the bone.

“The first time, you worry because you have cancer,” says the 72-year old retired hairdresser. “The second time, when it’s in the bone, it’s getting a little bit on the scary side.”

But regular follow-up by Sunnybrook paid off. “They told me it was just one spot,” he recalls, “very, very small, almost undetectable since it was so small, really early stage.”

Cancer that has spread to only a few spots is known as oligometastases. It meant that Rodney could opt for a technique called stereotactic body radiotherapy (SBRT) for oligometastases.

“The conventional thinking about any solid cancer that has spread,” explains Dr. Patrick Cheung, a radiation oncologist with the genitourinary and lung cancer care teams at the Odette Cancer Centre, “is that it has spread microscopically everywhere, and therefore there would be no point to try to eradicate each spot of cancer that we could see on the scans. Usually, the main treatment for a few metastases is the same as if there were 100 metastases, which would be some type of drug therapy (like hormone therapy for prostate cancer) to slow down progression. Eventually it stops working after a certain period of time.”

At Sunnybrook, “based on promising results, our interest is to be a little more aggressive,” says Dr. Cheung. “In addition to the standard hormone therapy, we’re delivering very highdose, very focused radiotherapy to eradicate the tumours we see on the scans. We’ve learned with this SBRT technique to treat tumours in any organ safely.”

It was used originally for stage one lung cancer. “The cure rates are very good for early stage lung cancer, with results comparable to surgery, for patients who, for one reason or another, cannot undergo traditional surgery,” he says.

SBRT could be described as a non-invasive knife. “It’s trying to mimic surgery,” he says, “which is rarely performed when cancer has spread.”

The biggest challenge for the radiation oncologist is avoiding organs adjacent to the area targeted by radiation. The oncologist’s expertise and experience are paramount during the procedure.

“We have to be very careful if there’s a normal organ right next to the tumour,” explains Dr. Cheung, “because these are very intense doses to try to eradicate the tumours.”

In time, after the treatment, new tumours may show up elsewhere, says Dr. Cheung. But studies have shown that in patients treated aggressively with SBRT, the proportion of long-term survivors is consistently higher than expected when compared to most patients with metastases.

“We can’t claim that we can cure all prostate cancers that have progressed elsewhere in the body,” says Dr. Cheung, “but even in those not cured, there’s evidence that progression is delayed. The studies show that 20 to 30 per cent of those with metastases treated in this way are long-term survivors.”

Rodney’s wife, Carol, is hopeful her husband has many more years for them to spend together. Originally from South Africa and now residents of Thornhill, Ont., they often enjoy the winter months in Florida.

“I’m an optimist by nature,” says Carol. “When the cancer came back on Rodney’s pelvic bone, I wasn’t particularly upset. Dr. Cheung said he would get rid of it. He did.”

Sunnybrook, she says, “is an amazing institution.”

More than a year after his SBRT treatment, Rodney is feeling fine.

“They checked me again last summer with a general bone scan and it was all clear,” he says. “The thing I like about the whole team is, if you tell them something, they respond right away, they’re on it right away. I have ultimate faith in these guys. They never make promises they couldn’t keep.” 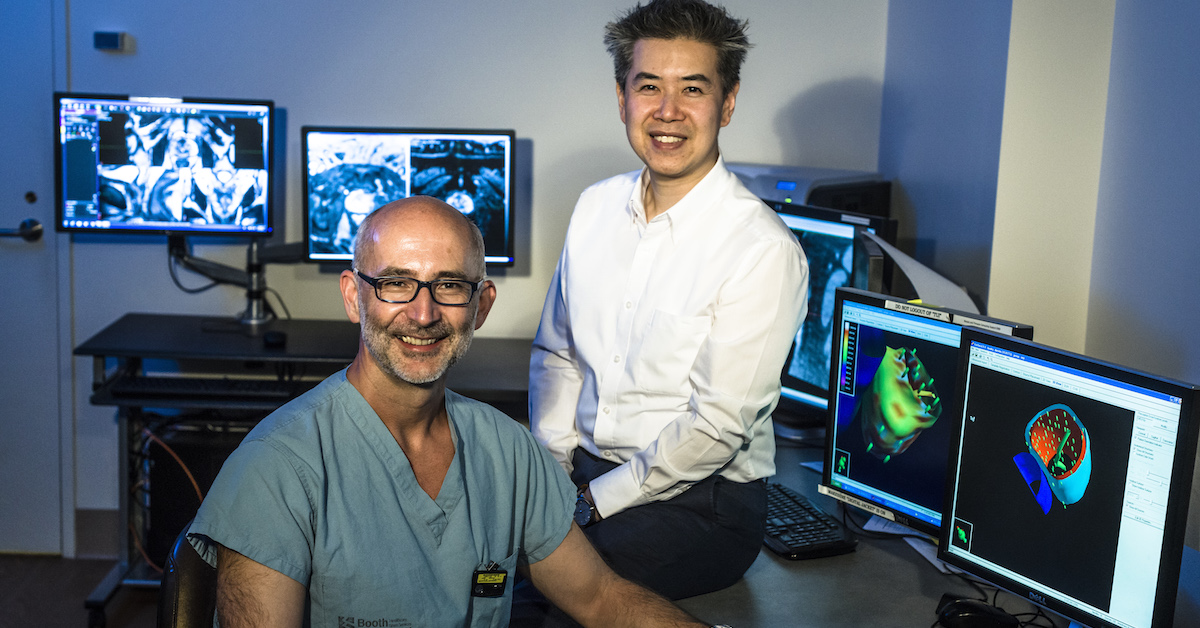 When Dr. Ihor Popadynec found out he had prostate cancer, he was only mildly surprised. He was having a problem with prostatic hypertrophy (enlarged prostate), a common condition in men as they age.

This condition can hide underlying tumours.

After 45 years as a family doctor, he’d examined hundreds of enlarged prostates in his patients. He’d referred men for regular PSA tests, then sent them to urologists when the results were suspicious.

He knew that one in eight Canadian men would be diagnosed with prostate cancer, most likely after the age of 60. “It’s the most common tumour men get,” he says. “Every male is facing this problem as he ages.”

“We can’t claim that we can cure all prostate cancers that have progressed elsewhere in the body, but even in those not cured, there’s evidence that progression is delayed. The studies show that 20 to 30 per cent of those with metastases treated in this way are long-term survivors.”
The 72-year-old retired physician realized he was vulnerable, even though his PSA was within normal limits, and there was no history of cancer in his family. What his biopsy revealed was a fairly aggressive prostate cancer.

But what shocked Ihor was not the diagnosis. It was the treatment. “In all my years in practice, surgery was the go-to treatment,” he explains. “It’s what I expected to happen to me.”

Instead, his urologist suggested that Ihor “speak to Dr. Morton at Sunnybrook. He’s got a technique that might be a better way to go.”

Increasingly, men across Ontario are turning to Sunnybrook for a better way to deal with prostate cancer, from diagnosis to treatment.

The technique that impressed Ihor’s urologist was developed at Sunnybrook. It is now being offered as a newer treatment option at major cancer centres all over the world, revolutionizing the way some medium- to high-risk prostate cancers are treated. For patients who cannot undergo surgery due to other medical conditions, or for patients who choose to avoid surgery, the prognosis with this treatment is as favourable as that which follows surgically removing the prostate.

The procedure is a combination of highdose- rate (HDR) brachytherapy, which delivers a short, high dose of radiation internally into the prostate, and a series of external-beam radiotherapy treatments (EBRT), which are directed at the pelvic area from outside the body to target any cancer cells that may lurk beyond the prostate gland.

“We do one treatment with HDR brachytherapy followed by a three-week course of 15 EBRT treatments,” says Dr. Gerard Morton, a radiation oncologist with the genitourinary cancer care team at the Odette Cancer Centre. “This treatment is particularly effective for men who have more aggressive cancers. We recently completed a clinical trial for men with medium- and high-risk prostate cancer. This treatment has been shown to reduce the risk of recurrence by half.”

He adds: “We’ve been following these patients carefully, and we now have patients followed up for 10 years. Over 90 per cent are cancer free after 10 years – and these are men who’ve had higher-risk prostate cancer. The results are equivalent to surgery.”

The prospect of achieving the same result without the need for invasive surgery was good news, and Ihor didn’t have to wait long to hear it. “They rushed the results to Sunnybrook, and Dr. Morton and his resident saw me within three or four days,” he recalls.

He also heard at that meeting exactly what the treatment would entail. “With the patient under general anesthetic, we insert catheters into the prostate and introduce a radioactive source, which moves in and out in a programmed fashion,” explains Dr. Morton. “It takes about 10 minutes and then we remove it. There’s no ongoing radiation.”

Ihor describes it as “multiple hollow prongs inserted into a grid near the treatment area. Inside the prongs there’s a core, like a ballpoint pen, that comes out to do a quick burn [radiation dose] and then it’s retracted again. It’s a matter of timing and intensity. And hopefully they get it all.”

The single HDR treatment is a newer form of brachytherapy. Originally, brachytherapy involved inserting low-dose rate radioactive implants, or “seeds,” which remained inside the gland permanently.

“We do use both procedures,” explains Dr. Morton, “the implant on its own and the HDR combined with external beam for more aggressive cancers.”

When Ihor woke up from the anesthetic, he felt no pain or discomfort, and there was no bleeding. “I went home within two hours of the procedure; I never even spent a night in the hospital,” he says.

“It was,” he concludes − reaching for a word that’s rarely associated with prostate cancer − “elegant.” 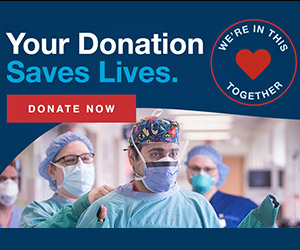