You’ve lived with your body for a while, and you know what it can do. If that ever deviates, even for just a few minutes, be warned. Arnold Bobkin’s story speaks to this loud and clear. Earlier this year, he was in the shower when the trouble started. He suddenly became paralyzed on one side, and was afraid he would fall over if he took a step. Trying to make nothing of it, he muddled through, dried off and proceeded to style his hair by plugging the blow dryer into his ear. He topped off his morning grooming routine by brushing his teeth with his finger. At this point, he wife insisted it was time to go to the emergency department.

Good thing he did. Arnold was having a TIA, short for transient ischemic attack. TIA’s are like mini-strokes, and put people at serious risk of having a full-blown stroke, often within hours or days. If Arnold had ignored his symptoms, and not received care at Sunnybrook’s High-Risk TIA Unit with its dream team of experts, he likely wouldn’t be golfing three times a week like he does now. Doctors found a major blockage in the carotid artery in his neck, which is a serious red flag. Surgery is usually the fix, but the trick is getting it done quickly if you are having symptoms. 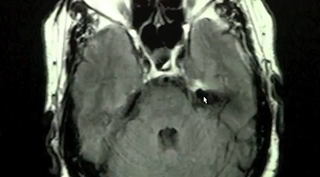 Outside Sunnybrook, it’s been found that not all symptomatic patients receive this procedure within the recommended time frame of two weeks, something Sunnybrook experts are working with the Ontario Stroke Network to change. As the saying goes, time is brain.

Remember that if you are having symptoms of a TIA, including sudden trouble speaking, seeing or moving, call 911 right away. There are protocols in place to direct patients with TIA or stroke symptoms to a designated Regional Stroke Centre like Sunnybrook. Or, like Arnold, listen when a loved one tells you it’s time to go to the hospital.

“It’s a very strange phenomenon that happens to your body that you don’t know what is going on,” he recounted. “For whatever reasons, I didn’t know what I was going through until my wife told me. If the worst had happened, I would have had a major stroke within the hours afterwards.”

Thankfully, that wasn’t the case, but the shot of Arnold’s arteries in my video clearly illustrates how dire his situation was. It all goes to show that what you can’t see can hurt you. So if your body is trying to tell you something, make sure to listen.

Monica Matys is a Communications Advisor at Sunnybrook.