A few years ago, my job had me crossing paths with a woman living in Toronto. We would liaise on projects about three times a year, and this went on for nearly a decade. While we developed a very close professional bond, I was always left somewhat puzzled by her physical appearance. She had no hair, no eyebrows or eyelashes, and yet seemed otherwise well. Thoughts of cancer treatment did cross my mind, but her boundless energy and the unaltering state of her appearance year after year made that unlikely. Then one day, in an e-mail that seemed out of the blue, she kindly explained that she had alopecia. Of course, I thought. Why hadn’t I considered that? And more importantly, had I made her feel that in some way she had to explain herself? 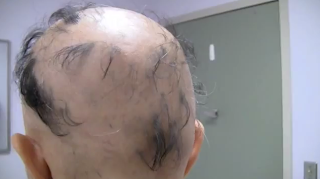 It all goes to say, ignorance is not always bliss, so here are a few things I’ve since learned. Alopecia areata is a chronic condition that can affect anyone at anytime or age. Resulting in hair loss in small patches, the whole head or the entire body, alopecia can come and go without warning and the cause is unknown. And it’s extremely common. If you were riding the subway, let’s just say at least two people in your car would be affected.

Here at Sunnybrook, we’re lucky to have a literal hair loss guru on staff. Dr. Jeff Donovan has treated countless patients with alopecia, and he told me that personal support and appropriate treatment can make a world of difference for patients. There are a variety of options, ranging from creams to injections. And Sunnybrook is also one of the few hair loss clinics in the country to offer a topical chemical treatment called DCPC, which is about 60% effective in promoting hair growth.

It was in this clinic that I met Beverley, a patient of Dr. Donovan’s who in mid-life, started experiencing hair loss. “I thought, gee, this is odd,” she told me. “And then consistently, it just fell out. It was really hard.” Beverley now comes in for weekly DCPC treatments, which last about 5 minutes and consist of a giant Q-tip saturated in the medication being rubbed all over her scalp. While the medication does cause some temporary discomfort, Beverley described it as not too bad.

But just as important as dealing with the physical side of alopecia, she told me, was managing the psychological toll. “I think the main thing is to not lose your own personality, not to get depressed even though it’s difficult at times. You’re still the same person and you’re getting help. When you come here, you’re getting help.”

Beverley agreed to talk to me for this story to try and help other patients and to educate the public about the condition. That’s knowledge I could have used a few years ago myself. And knowing how pervasive alopecia is, hopefully this can help you, too.

Monica Matys is a Communications Advisor at Sunnybrook.